Dad’s Letter # 03 is the first of three letters about his sister Elise. I wrote a total of six letters to Dad during the Spring and Summer of 1994 and he replied with eight of his own. So his letters # 3, # 4 and # 5 were replies to my letter # 3.

The nine questions in this letter. I think I need to apologize here for the general misunderstanding between my Dad and me regarding these letters. My Dad assumes that I have a copy of my letter to him and so I know exactly every question that he is answering. Unfortunately, I only kept a copy of my letter # 4 and so am only guessing what my exact questions were in my letters 1 to 3 and his replies. We must have talked about this situation because his next letter is well organized and he restates each of my questions and then he follows my Q with his A. So here are what I believe are my nine questions:

1 — What are your earliest memories of your sister Elise?

2 — Did you two get along when you were young?

3 — What kind of family activities did you two participate in?

4 — Could you describe your school years? What kind of books did the two of you read?

5 — Did you and Elise play the same games?

6 — Did you have any problems with your sister being three years older than you?

7 — Why did both you and Elise pick Cal for your college?

8 — Did Elise enjoy her years at Cal?

9 — Did you and Elise have the same  friends? 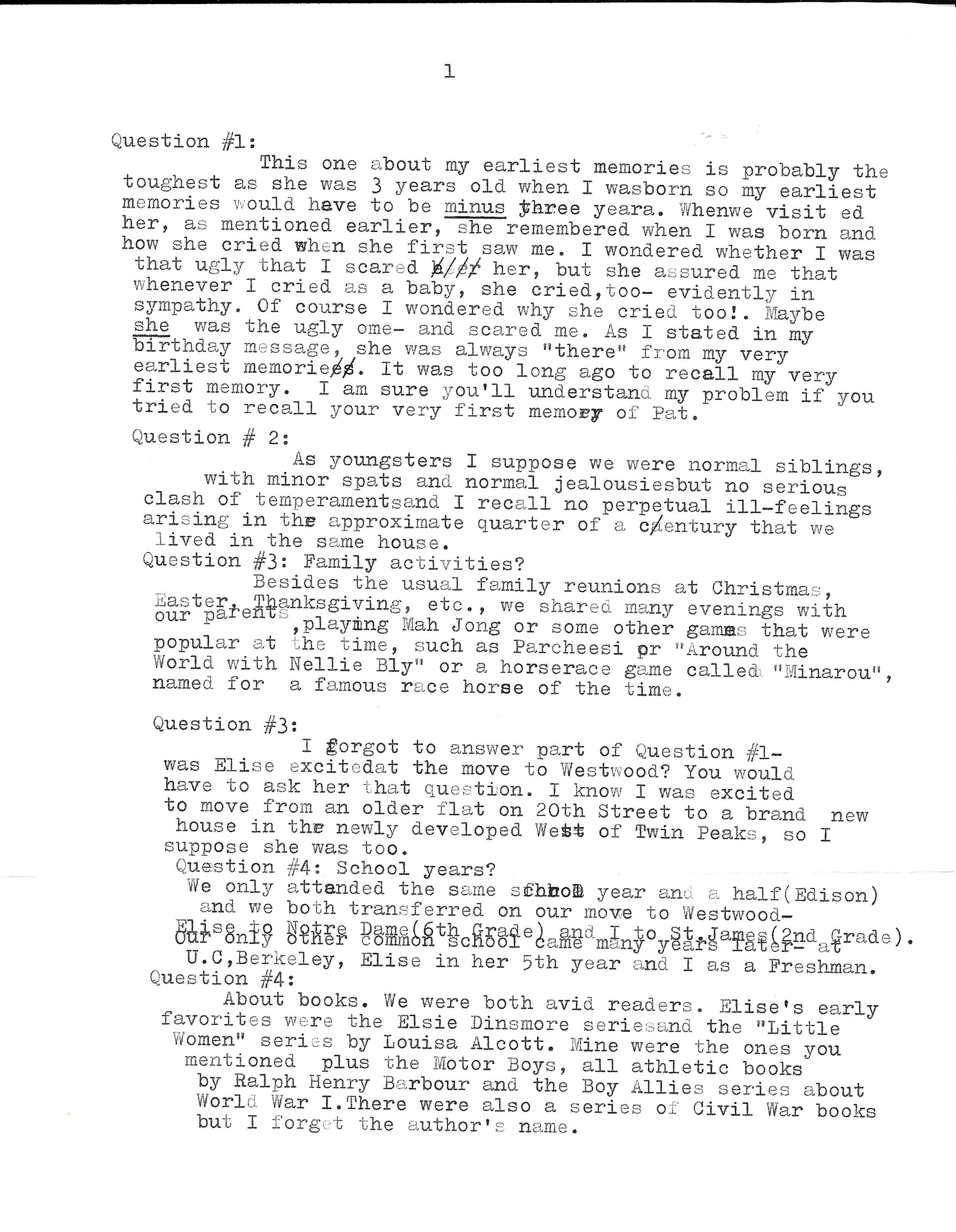 Introduction: Dad visited Elise on her 87th birthday, 6 days prior to writing this letter. She was born on May 12, 1907. Elise sold her home at 101 Westwood in 1983 and she moved in to a cottage next door to her son Tom in San Mateo.  Several years later she moved again to a nursing home in Redwood City.
Tauck Tour — Tauck is a Connecticut-based company that operates guided tours and river cruises all over the world. Dad and Mom restricted their travels to the US and Canada and went on one and sometimes two Tauck tours a year in the 70s and 80s. In 1987 they went on a tour of the old South which included New Orleans, Louisiana; Memphis, Tennessee and Biloxi, Mississippi.

Q #1 — What was your earliest memory of Elise?  I’m glad Elise ,when Dad visited on her 87th birthday, brought up her story of crying whenever her baby brother cried!

Q #3 — What kind of family activities did you two participate in?
Dad mentions four games, only one I am familiar with. Some of my Asian acquaintances at Kaiser played Mah Jong during lunch time and I sat in a few times. Our next door neighbors (the Lozares) also hosted a couple of neighborhood Mah Jong games a few times.

Parcheesi — an American adaption of Pachisi, an Indian cross and circle board game.

Mah Jong – a tile-based game developed in China in the mid-19th century.

Minoru – – a parlor game based on a horse race. The game is named after an Irish horse who ran 13 races between 1908 and 1910 and won seven of them, including the Epsom Derby. Minoru was owned by King Edward VII of the U.K.

Q #4 — Was Elise excited about the move to Westwood?
about books — I probably mentioned some of the boyhood books of his that he kept and I also devoured when I was a kid: The Rover Boys and Baseball Joe series were my favorites.

school years — Edison Elementary School was located on 22nd Street and Dolores, three blocks from the Dwyer household on 20th Street. Notre Dame was an elementary school for girls on Dolores Street. It later merged with the Mission Dolores School for boys. St James elementary school is located on Fair Oaks Street between Dolores and Guerrero near 24th Street.
Q #7 — how did the both of you end up at Cal?
It seems that Dad started following Cal football in 1921, when he was 11 years old.

Q #9 — Elise and Dad’s friends.
The League of the Cross Cadets was a Catholic total abstinence confraternity that included a band and a competitive drill corps. It was founded in 1873 in London and soon spread around the world. The League of the Cross Cadets was My Grandpa’s organization, though he was in Company D, associated with Sacred Heart Parish. He held the rank of captain for several years around the turn of the century and his company received awards in 1899 and 1900. Company C was formed in St Emydius parish in the 1920s. By that time the organization had become more informal and branched out to include such sports as crew and basketball.

The Doran Club was the name of the teen club of St Emydius Parish. I believe Father Doran was the first pastor of St Emydius.  I knew all of the names here very well except for the Kennedy sisters. Gerald Haggerty’s family lived on Westwood Drive when Dad was growing up. Gerald and Fran were best friends. Janet Foley was Gerald’s girl friend for many years but finally realized he was never going to propose and so dropped him and eventually married John Sheffield. Katherine Denehy married Joe Basile and her sister Barbara married George Sherman. Hazel Dorn married Mel Cloney. My Mom and Dad, Fran and Elsie and their close friends formed the No-Name club which met once a month or so for years. Other members were the Basiles, Shermans, Sheffields, Cloneys, Gerald and his long-time companion Carmel O’Donnell, and Will and Ilona O’Connell. Will and Dad were best friends at SI and Cal. Ilona was the only member who did not grow up in the Bay Area. She and Will met during the war.

Dad continues answering my questions about his sister Elise in his next letter and in a subsequent letter has much more to say about the No-Name crowd and their social activities over the years.

I am a family man with interests in family history, photography, history and travel. View more posts